I don’t know if there are any wild Lynx on the loose in Scotland (I’d like to think that there are though) but I did have the pleasure of seeing a fully grown Serval when we went to pick up our Bengal kitten from a cat breeder in Aberdeenshire.

If I remember correctly, the Serval, who was a sizeable beastie, was called Shuey. I could well imagine there being quite a fuss if he ever got out as he very nearly did when Mrs Girth left the door open behind her and he made a quick dash to freedom.
Mrs Girth grabbed him around the haunches just as he reached the doorway before realising that she was now holding on to something considerably larger than the average moggy and with suitably larger teeth and claws! Fortunately Shuey just gave her a look a slight annoyance rather than ripping her face off!

maximus otter said:
They’ve calmed down recently, but they were triple-hard bastards a few hundred years ago: 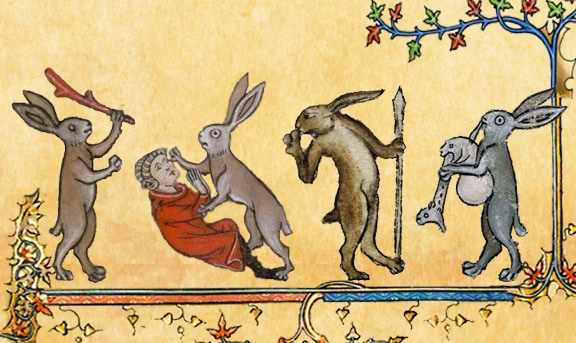 Never trust an animal capable of ****ing you up to the music of bagpipes.

I love those images.

Some modern Hares by Barry Flanagan.

ramonmercado said:
I love those images.

Some modern Hares by Barry Flanagan.

We have a lot of hares around here and the difference, once you know it, is very noticeable. Only people who've never seen a hare before could confuse it with a rabbit.

Location
generally on the fringes

I don't think it's been mentioned, but there was a jolly nice documentary on Scottish wild cats (which was on Netflix at one time) called 'Tigers of Scotland'. Worth seeking out.
https://www.wildfilms.co.uk/tigers-of-scotland/

The domestic tabby will have pink feet.
Click to expand...

Most of the cats I've lived with had black paw pads, I don't think this is a rule. They were all DSH.

Lb8535 said:
Most of the cats I've lived with had black paw pads, I don't think this is a rule. They were all DSH.
Click to expand...

This is quite fun. In a depressing way. A Wildcat leaflet and game from the Trossach Highland Forest!
Last edited: Mar 30, 2021

catseye said:
Those are gorgeous.

We have a lot of hares around here and the difference, once you know it, is very noticeable. Only people who've never seen a hare before could confuse it with a rabbit.
Click to expand...

Same - I encounter both Hares and Rabbits regularly. Hares move differently, have longer legs and their ears are longer and more tubular. They are usually bigger when adults. Once you get to know hares you'll never mistake them for rabbits. Both are tasty though. Hares being gamier - although it's been a while.
Last edited: Mar 24, 2021

Lb8535 said:
Most of the cats I've lived with had black paw pads, I don't think this is a rule. They were all DSH.
Click to expand...

Naughty_Felid said:
Apart from predominately black cats, most DSH's, (moggies) can have pink pads. Our two black and whites and Calico Mumbum all have pink pads.
Click to expand...

Right and I think it goes with skin coloring. I had a black and white splotch with bi-colored paws and a calico who as I remember had pink paws. But my several tabbies had black paws and picking up an irritated tabby Penelope and holding her upside down I note black paws. The pink paws are cute but do show the dirt

Our half-Bengal cat has all black pads - our Tortie had a mixture or black, brown and pink pads.

(Toothless lounging in my seat this morning)
W

We have hares as a kind of family totem good luck thing.
Have pictures and ornaments of em around the house

I saw two beautiful hares on my way to work this morning...they seemed to be loving the sunshine and the air.

My favourite British mammal. So evocative and ancient looking.

Chinese Wild Cats, I wonder if any got loose in Scotland?

The wildcats’ DNA is inscribed on the genes of some pet cats living on the Qinghai-Tibetan Plateau, but the mixing of genetic material extends back only a couple dozen generations, researchers report online June 23 in Science Advances.

Cats and humans have lived together in China for at least 5,300 years, yet previous genetic studies on feline domestication hadn’t included DNA from East Asian cats (SN: 12/17/13). So researchers wondered whether the mountain cats (Felis silvestris bieti or Felis bieti) had ever contributed to Chinese pets’ genes. Yes, the team found, but the short length of time mountain cats and housecats have been mating suggests Chinese domestic cats have their origins elsewhere, probably in the Middle East (SN: 6/19/17).

Shu-Jin Luo, a geneticist at Peking University in Beijing, and her colleagues came to that conclusion after they compared DNA from 27 Chinese mountain cats, 239 Chinese domestic cats and four Asiatic wildcats. The researchers didn’t encounter the elusive Chinese mountain cats in the wild; instead, they took samples from museum pelts, roadkill carcasses and zoo animals. The team did collect samples from the house cats, however. Rural Chinese cats come and go as they please, so “Oh, he’s not home yet, so we’ll wait for [an] hour” became a familiar refrain, Luo recalls. ...