Staging Magic: The Story Behind The Illusion (Exhibit)

Harry Price (of Borley Rectory fame) amassed a "Magical Library" of around 13,000 volumes on magic, parapsychology, witchcraft, psychical research and the like, which were bequeathed in 1948 to the UCL Senate House Library (Camden New Journal yesterday). Price was also an amateur Magician and Senate House has taken about 80 items to form the basis of a new Exhibition 'Staging Magic: The Story behind the Illusion' The exhibits include a first edition of Reginald Scott's The Discoverie of Witchcraft (1584), the first printed book in English to describe a magic trick; as well as the 1634 edition of Hocus Pocus Junior: The Anatomie of Legerdemain (sleight of hand). This last book set the formula for conjuring manuals over the next 250 years (including the rabbit-from-a-top-hat trick believed to be first performed by the 19th Century magician John Henry Anderson).

Anyway, Senate House Library WC1E 7HU until June 15 admission free. If I ever get a lunch-break I'll go and report back on its worthiness.
Last edited by a moderator: Feb 1, 2019

*Applying encouragement to do this thing*

I wasn't overwhelmed by the Staging Magic Exhibition to be honest, there were maybe a dozen books from the Harry Price Collection - all behind glass (which made photographing difficult). But the books were genuine and rare and I now have seen them, I don't recommend anyone travelling far to the Exhibition but I was at least whelmed.
In addition to the Price Collection was a section on conjuring tricks as a diversion in the WWI front line trenches, a set of Fry's Chocolate magic tricks collectable cards and a silent home movie video of Harry twatting about with a female in a pointy witch hat.

'Fay, Prefto' : The Whole Art of Legerdemaine 1727 for the Cup and Ball and the burnt Card nailed to the Wall. A signed photo of Houdini made out to Price and the cover of a book on Pepper's Ghost that caught my eye. 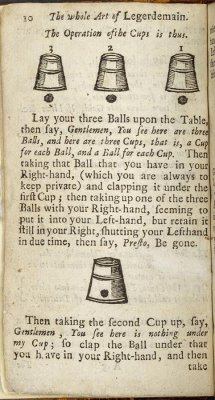 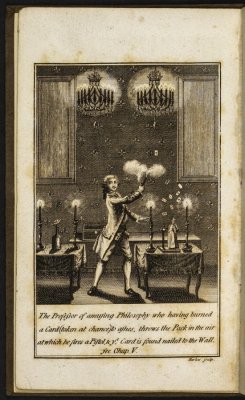 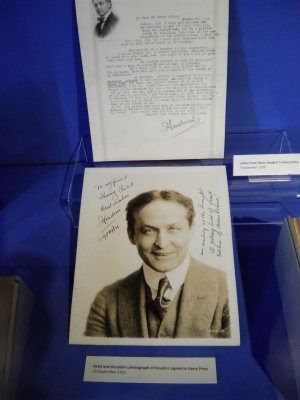 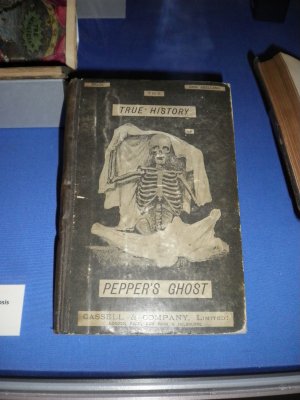