Because of this lowbudget film (which I thought I had posted about here before, but I couldn't find it), I came across the legend:

The first report on 26 December 1971 was by professional kangaroo shooters from Eucla in Western Australia, near the border with South Australia. They claimed to have seen a blond, white woman amongst some kangaroos, and backed their story with grainy amateur film showing a woman wearing kangaroo skins and holding a kangaroo by the tail. After further sightings were claimed, the story was reported around the world, and journalists descended upon the town of Eucla which had a population of 8 people at the time.[1]

Unveiling of the hoax
The incident was eventually revealed as a hoax, initiated as a publicity stunt. The girl on film turned out to be a 17-year-old model named Janice Beeby. She did appear in a photograph taken later, as an evidence of the Nullarbor Nymph, but the woman in the original photograph used by the media to perpetuate the hoax was Geneice Brooker,[2] the partner of Laurie Scott; he was one of the kangaroo shooter hoaxers. Scott admitted to the Sunday Mail in 1972 that the hoax was created by a passing publicist who happened to be in the Eucla Hotel and had contacts within the media.
Click to expand...
What would be interesting is if there were any reported sightings before the hoax began. What I haven't been able to find is the original "grainy amateur film" alluded to above.

A JPEG image ot the 2007(?) newspaper retrospective on the hoax (including an interview with the original "nymph" in the photo triggering all the publicity) can be accessed at:

Here, excerpted from the article image, is the (Geneice Brooker) photo that was used to publicize the story. 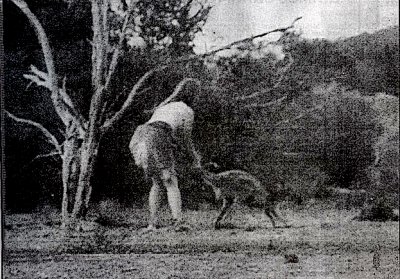 ​
Here's another excerpt - a photo of Geneice Brooker standing in front of a Nullarbor Nymph sculpture, with an inset of her face as of the time of the hoax.