Lovely and Impressive and CLEVER then

Lord Lucan said:
Impressive isn't it? Here's another image from higher up giving a better idea of it's actual proportions.
See just how big this thing is!
Click to expand...

Ought to be fixed. Regarding posts up above suggesting a stunt... now that's a great idea. Why didn't I think of that before (now only if I had something worthwhile to promote)?

Here's a recent summary of ice circles and how they form ...

The Science Behind Snow Rollers, Ice Circles and Other Winter Phenomena ...

Often spotted on lakes, ponds, rivers and other slow-moving bodies of water, ice circles look like frost-coated lily pads floating on the water’s surface. In actuality, ice circles occur when moving water forces ice to slowly rotate. “What’s happening here is shear—when on one side of the ice you have water that’s moving faster than on the other side causing the ice to rotate,” Jackson says. “The result is an eddy current, like a whirlpool.” The meteorologist explains that there are two ways for ice circles to form. The first happens when there’s ice in a stationary area but a change in water speed due to a topographic force, such as a bend in a river, causes the ice to rotate until it forms the shape of a circle. The other instance occurs when a hunk of ice breaks off of an ice sheet that’s located in a rotation zone. “The water surrounding it will cause it to rotate, naturally forming into a circle as any pointy edges start to grind down as they brush against the surrounding ice,” he says.

Where to see ice circles: While the Westbrook circle stands out for its magnificence, most ice circles are only a fraction of its size and crop up on the surface of lakes, ponds and rivers in areas known for reaching frigid temperatures in the winter, such as Canada, the northern United States and Scandinavia.
Click to expand...

hunck said:
According to this short video, it's similar to car manufacturer AION's logo & is a publicity stunt.. ...
Click to expand...

Yep ... It's clearly artificial and not an example of the natural phenomenon.

Last year's huge ice circle on the Presumpscot River (Maine) appears to be re-emerging this winter.

Coming around again: Famous ice disk seems to be re-forming

An ice disk appears to be forming in the same Maine river where an unusually large one formed last winter and quickly gained international fame.

The City of Westbrook tweeted an aerial view of the disk in the Presumpscot River with the message: “ICE BREAKING NEWS: Ice Disk 2020 is making a run for it...It’s not a perfect circle yet, but it is rotating counter-clockwise again & the seagulls are along for the ride.” ...

The ice formation comes just about a year after a disk measuring about 100 yards (91 meters) was spotted in the Presumpscot River. It eventually had a devoted webcam; social media users compared it to an alien spacecraft and the moon; and ducks used it as a raft.

A video of the disk shows a nascent ice blob that is thinner and less circular than the famous disk of 2019. ...
Click to expand...

Ice pancakes on the River Ness.

There's a video at the link.

'Ice pancakes' and 'ice balls' are forming in Manitoba. This news article illustrates these latest examples and provides explanations for how they form.

From ice balls to now ice pancakes, water in Manitoba is showing the unique shapes it can make.
Ice pancakes have been spotted at Winnipeg Beach and at York Landing.

Greg McCullough, a geographer at the University of Manitoba, said the formations are created when ice crystals start gatherings in little groups on the water's surface in slightly wavy conditions.
"They'll tend to grow outwards in roughly a circle, and then gradually the ice will form up and these groups will be jostling around together. So they will rock around and they will knock any rough edges off and you end up with a whole lot of fairly rounded pancake shapes," said McCullough.

Ice balls have also been found in the province on Lake Manitoba. ...

Experts says snowflakes freezing on top of the water, mixed with waves or wind can cause everything to turn and create snowball shapes. ...
Click to expand...

The Presumpscot River ice circle / disk has made a 2022 appearance following a relatively disappointing 2020 / 2021 winter season.

The disk has begun to form in the Presumpscot River, where it partially formed in 2020 but failed to draw a worldwide audience like in its first appearance in 2019.

Westbrook city officials shared photos of the formation Wednesday on Facebook, encouraging residents to share more images of the disk while it’s still around. ...

Three years ago, a 100-yard-wide (91 meters) ice formation appeared in the river for the first time and brought international attention to Westbrook before it dissipated with the advent of warmer weather.
Click to expand...

We have a separate thread on ice volcanoes:

Mysterious ice formations showed up in Chicago this week​

You've heard of blizzards and maybe even the polar vortex, but have you heard of ice pancakes? What about ice bites or ice jams? These unique names sound fascinating but require specific weather conditions. 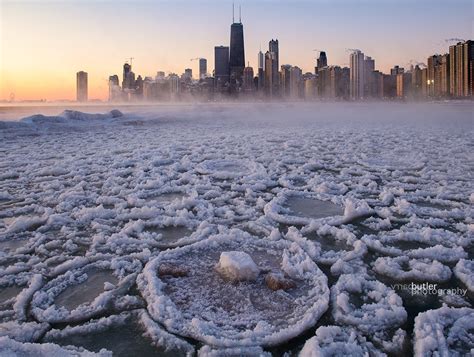 This week ice pancakes were found along Chicago's shoreline of Lake Michigan.

Sharan Banagiri's photos were taken at Loyola Beach at Rogers Park about 10 miles north of downtown.

Someone in an online group posted this photo for identification. I don't think I have seen this style before.

Xanatic* said:
Someone in an online group posted this photo for identification. I don't think I have seen this style before.
Click to expand...

I'm going to hazard a guess that those are caused by a bird landing, then breaking the thin ice.

A couple of days ago, slushy ice circles, also known as ice pancakes, were seen on the River Bladnoch in Galloway’s surface due to a cold snap in the United Kingdom. Callum Sinclair, the project manager for the Scottish Invasive Species Initiative (SISI), discovered spectacular circular sheets of ice. The phrase "pancake ice" is used to describe usually circular ice formations that are up to 10 cm (4 inches) thick and 30 cm (12 inches) broad. The rimmed edges of pancake ice pieces are frequently raised due to repeated impact with other ice, which is how pancake ice is typically organized. The buildup of slush and frazil ice, a collection of ice crystals that form on moving water, also helps explain why pancake ice has elevated edges.

Not quite the same, but interesting:

The Whittier Elementary School playground in Utah was peppered with unusual white polka dots on Wednesday.

Chris Herrmann arrived at the school for work one chilly January morning when he came across the bizarre sight. 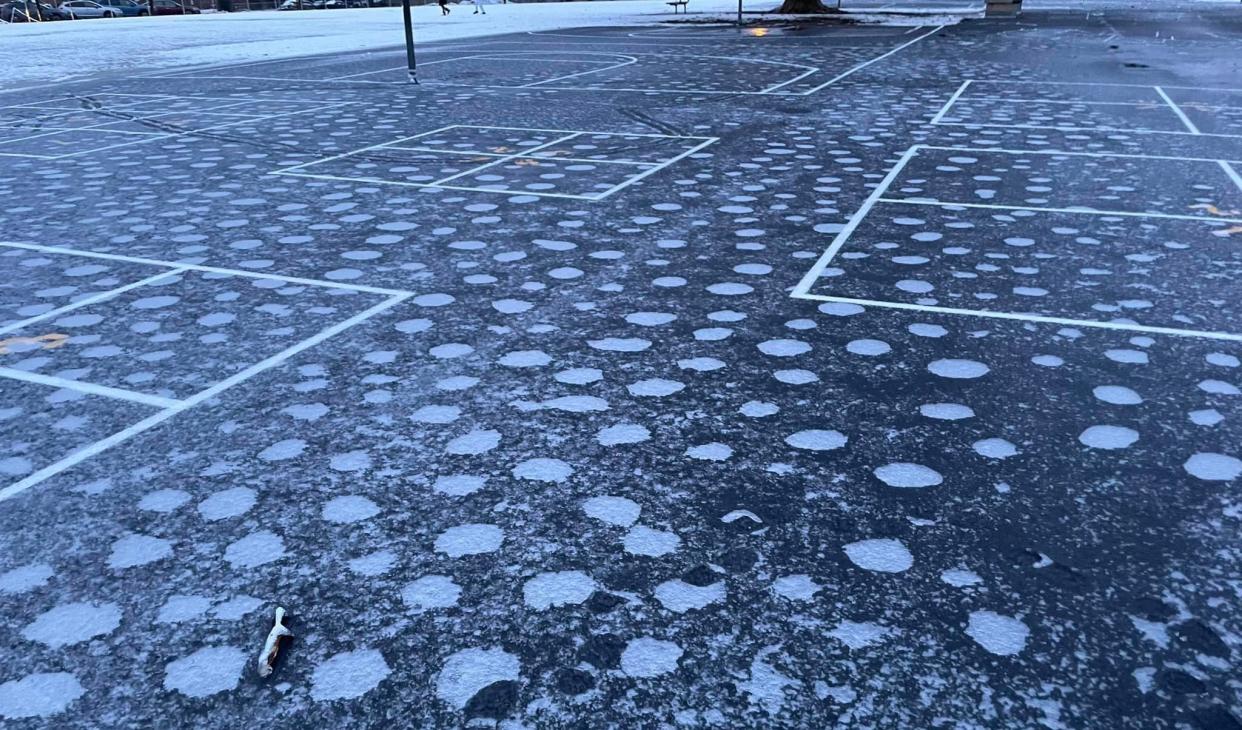 Thousands of white polka dots covered the black asphalt playground, which was covered in ice that had formed after a rainstorm had swept through the previous night.

The "dots" were air pockets that had formed underneath the ice.

Since the cold rain freezes as soon as it makes contact with the asphalt, Lautenbacher noted, the air bubbles that are being pushed out of the asphalt don’t have enough time to escape into the open air. This causes the tiny air bubbles to collect, eventually forming larger air pockets under the ice as they try to escape.