maximus otter said:
I can't see a tattoo without hearing an indulged toddler whining, "Look at me, mummy; look at meeeee!"

I see women with their kids' names and dates of birth tattooed on their anatomy. Let's sum up that thought process:

"You mean to say that an eight-pound human being tore itself out of my body in a tsunami of blood, screams and faeces? Shit, I have to start writing this stuff down... I know: I'll pay a gum-snapping teenaged art school dropout £100 to misspell an aide memoire somewhere on my rind!"

Or maybe they're just doing something because they want to, and couldn't give a toss what other people think of it? When you see a shapely woman with alluring makeup and a smart outfit, do you assume that they've only gone to that effort because they're desperate for a shag?

I know there are plenty of dolts who are happy to have illiterate slogans and horrific scrawls splattered over their skin for attention, but to throw everyone with a tattoo into that category is incredibly narrow-minded. I know several people who have had some frankly jaw-droppingly good artwork done, and I'm confident that other peoples' opinions were pretty low on their list of considerations.

There are actually some really awesome tattooists around. I've met a couple - real artists.
However...that doesn't stop the customers making poor choices about (a) the artist and (b) the artwork and (c) the placement of said tattoo.
L

I do too. Steve Butcher has got to be one of the best portrait artists out there. It’s crazy how good he is.

This discovery pushes back the date range for the earliest figurative tattoos by roughly 1000 years ...

'Oldest tattoo' found on 5,000-year-old Egyptian mummies
Researchers have discovered the oldest figurative tattoos in the world on two 5,000-year-old mummies from Egypt.
The illustrations are of a wild bull and a Barbary sheep on the upper-arm of a male mummy, and S-shaped motifs on the upper-arm and shoulder of a female.
The discovery pushes back evidence for the practice in Africa by 1,000 years. ...

Dark smudges on his arm were thought to be unimportant until infrared scans revealed that they were tattoos of two slightly overlapping horned animals. One is interpreted to be a wild bull with a long tail and elaborate horns; the other appears to be a Barbary sheep with curving horns and a humped shoulder. ...

The female mummy has four small S-shaped motifs running down her right shoulder.
She also has a motif that is thought to represent batons used in ritual dance.
The designs are under the skin and the pigment is probably soot.

Previously, archaeologists had thought only women wore tattoos in the ancient past, but the discovery of tattoos on the male mummy now shows body modification concerned both sexes.
The researchers believe that the tattoos would have denoted status, bravery and magical knowledge.
The mummies were found in Gebelein in the southern part of Upper Egypt ...

Radiocarbon results indicate that they lived between 3351 and 3017 BC, shortly before the region was unified by the first pharaoh at around 3100 BC.

The oldest example of tattooing is found on the Alpine mummy known as Ötzi who is thought to have lived between 3370 and 3100 BC. But his tattoos are vertical or horizontal lines, rather than figurative.
Click to expand...

Canada: how a dying man’s wish that his tattoos outlive him came true

Chris Wenzel hoped his children could appreciate the intricate designs that adorned his body after his death. An Ohio-based company made it happen

“He fell in love with art and had such a passion for tattoos,” his wife, Cheryl Wenzel, told the Canadian Press. “He would say he was a slave to the needle because he loved to tattoo so much.”

And in his final months, Wenzel, a well-known tattoo artist, discovered an Ohio-based company that could potentially make his wish a reality.

Operated by father-son team Michael and Kyle Sherwood, the company provides tools, directions and paperwork to ensure the skin is carefully removed and preserved shortly after death. They then use a propriety process to preserve the designs.

In Wenzel’s case, the estimated fee for preserving the many tattoos which covered much of his upper torso, exceeded C$80,000 ($60,635).

“I don’t care what it takes. I’m going to get this done for him,” she told the Canadian Press.

The family plans to present the preserved tattoos to the public at an upcoming tattoo expo in the spring.

Cheryl Wenzel also told Chris before he died that she also intended to preserve her own tattoos, according to CTV News.

“I know one day I’ll be hanging here with my husband,” she said.
Click to expand... 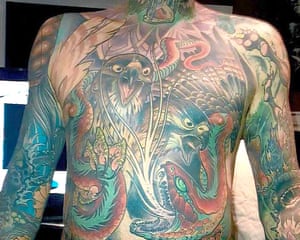 When the Skinheads of the '70s settled down and started a family, they let their hair grow to hide the tattoos. They would now be of pensionable age with the hair beginning to fall out - so next time you're bored in a queue at the Post Office, look out for OAPs with the word FUCK stamped on the back of their shiny head.

US singer Kelsey Karter [who?] has got a tattoo of her favourite singer on her face

If you can guess who it's supposed to be there will be a prize.

hunck said:
If you can guess who it's supposed to be there will be a prize.
Click to expand...

Would the prize be a free facial tattoo?

By a remarkable coincidence, I have a tattoo of that singer's arse...on my actual arse!

David Plankton said:
Would the prize be a free facial tattoo?

By a remarkable coincidence, I have a tattoo of that singer's arse...on my actual arse!

jesus, and the tattoos not the saddest part of the whole thing, having read the article

henry said:
esus, and the tattoos not the saddest part of the whole thing, having read the article
Click to expand...

micheal jackson at a guess??

Ive never heard of the guy it is

Shady said:
micheal jackson at a guess??
Click to expand...

After that documentary at Sundance this week, that really would be a tragic choice.

A documentary premiered featuring people claiming to have been sexually abused by Whackson as children. It'll be on Channel 4 soon. Already causing an R. Kelly-sized stir. I bet there really are fans with MJ tattoos, as well.

Yep, i bet there are, and on their faces, so silly

hunck said:
US singer Kelsey Karter [who?] has got a tattoo of her favourite singer on her face

If you can guess who it's supposed to be there will be a prize.

Is it One Direction legend Harry Styles?

CarlosTheDJ said:
Is it One Direction legend Harry Styles?

There's a virtual pint waiting for you at the Troll's Head.

Self-explanatory really. I googled 'Ian Watkins tattoo' to find that again and noticed a tat of Rolf Harris among the results. There seems to be a trend of ditching tattoos of suddenly-disgraced heroes.

hunck said:
US singer Kelsey Karter [who?] has got a tattoo of her favourite singer on her face

If you can guess who it's supposed to be there will be a prize.
Click to expand...

I'm calling bullshit on this. Surely nobody but the most crazed psycho-stalker would think having that tattoo is a compliment?

A wise man once said, "If you want to be rich, invest in tattoo removal services".

GNC said:
A wise man once said, "If you want to be rich, invest in tattoo removal services".
Click to expand...

When I go entirely bald, I'm going to have the face of Brad Pitt tattoed on the back of my head. Then start walking backwards everywhere.

escargot said:
I'm calling bullshit on this. Surely nobody but the most crazed psycho-stalker would think having that tattoo is a compliment?
Click to expand...

I know! What an awful tattoo - and on her face too! Some people are happy to throw their looks into a bin.

photo looks very convincing, id be surprised if its a fake, but i guess cant be ruled out ... im sure a quick internet search on her would quickly confirm or disconfirm the very tragic backstory

Which eventual revelation will make Ms. Karter seem more idiotic - the tattoo is real, or it's all a PR prank?