Anyone know who took this pic? 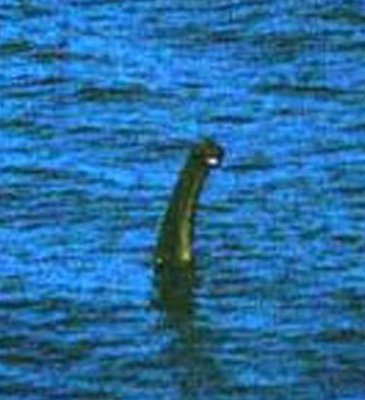 I'm pretty sure it was Anthony 'Doc' Shiels in 1977. Get hold of a copy of his book Monstrum, if you want to find out more info straight from the (river) horse's mouth, as it were.
Cheers,
CoolWeeD
A

#3
HEY EVERYONE,
I WOULD LIKE TO HEAR FROM ANYONE THAT HAS HAD A PERSONAL EXPERIENCE WITH THE LOCH NES MONSTER (I.E. A SIGHTING, OR YOU MAY HAVE SEEN A VIDEO OR SOMETHING LIKE THAT) WHEN I GET OLDER IM PLANNING ON GOING TO SCOTLAND AND SEE FOR MYSELF.
ZERO
R

Well, i live in inverness which is about 2 miles from loch ness and ive been there many times and not seen it. However i am quite sure there is something odd in the loch as i know many trustworthy and sober people who have seen something. My own gran saw it when she was younger and described it as green/brown and like an upturned boat. I also know the guy who was in the guinness book of records for viewing the monster for the longest time (a couple of hours). the record is not in the newer versions but was in one from the 60's or 70's. These people definitely saw something but whether it is a monster or something equally odd i dont know. My gran's sighting definitely started my interest in all things weird
C

About four years ago I was working in a job which meant I was often travelling along Loch Ness by coach. I saw "something" on the loch on two separate occaisions. The first was of the "classic" upturned boat kind of sighting. Probably about five miles from Fort Augustus, travelling along the north shore of the loch, I looked out and saw a dark shape or hump approximately halfway across the loch. Not knowing exactly how far away it was I can't really give an accurate estimate of size, but it seemed to be slightly smaller than a dinghy. After perhaps 20 seconds the object submerged quite quickly but without a splash.
My second sighting was about two months later (the first was in early May). As the bus approached Urquart Castle, heading towards Inverness, I noticed a disturbance in the water in the middle of Urquart bay. Channel 4 TV had recently repeated a documentary about the Loch Ness Monster which had included some camcorder footage which had initially seemed very impressive, showing what appeared to be large animal thrashing about in the bay. The reason I mention this is because to my mind, what I saw that day was almost exactly the same as the video, however, seeing it "in the flesh" as it were, it looked to me far more like some kind of eddy or interference pattern in the water than a living creature. I have to say I was rather disappointed, as being from Inverness I had always wanted to believe that there was a monster. (of course, my interpretation of the event does not mean that there isn't!).
While we're on the subject, I read recently in one of the Inverness Newspapers (Highland News I think) that a Japanese webcam pointed at Loch Ness had shot around 40 seconds of clear footage of the monster. This is supposedly posted on the web somewhere but I've not yet had any luck finding it. Anyone know where it is?
A

Definitely claimed by "Doc"Shiels but because of its clarity doubts as to Mr.Shiels honesty have recently been expressed.said he could summon a creature at will.I also think he photographed a sea monster off the Cornwall coast some years ago.(Picture in The X Factor)
L

I`m sure I read somewhere (infact probably in a few places) that the photo was a fake. It is too good to be true. Loch Ness is a weird place to visit, there is a slight vibe to it. But I`ve been on the loch itself and so far no Nessie but seeing isn`t believing.
lucydru
A

#8
I think I'd pop my head up for a looksee if there were naked witches cavorting by my lochside...
A

I remember when I was 11 or 12 (I'm 16 right now) on one of the shows on Discovery Channel or something like that, they had a special on the Loch Ness monster and they showed this one pic that I haven't been able to find on the web to this day. It seemed to be a picture of the Loch Ness monster jumping in the air with his mouth open. The scary part was that his eyes were red. I think it was just a head shot, but it scared the bejesus outta me back then. Does anyone know what I'm talking about?
A

IrateDwarf said:
Loch Ness monster jumping in the air with his mouth open. The scary part was that his eyes were red
Click to expand...
How about the shark dangling off a Trawler photo?

members.aol.com/paluxy2/plesios.htm
Link is long dead. Here is one of the possible photos to which the link led - salvaged from the Wayback Machine. 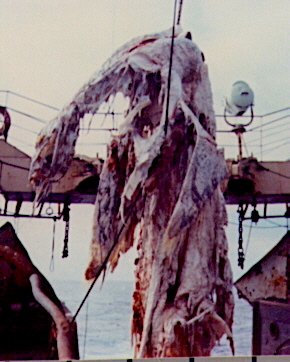 #11
Tubal Cain said:
I think I'd pop my head up for a looksee if there were naked witches cavorting by my lochside...
Click to expand...
The tourists scared off all the witches. I do have evidence of psychic activity by the loch though. I paid good money to see the official monster exhibition. They certainly saw me coming...
A

IrateDwarf said:
I remember when I was 11 or 12 (I'm 16 right now) on one of the shows on Discovery Channel or something like that, they had a special on the Loch Ness monster and they showed this one pic that I haven't been able to find on the web to this day. It seemed to be a picture of the Loch Ness monster jumping in the air with his mouth open. The scary part was that his eyes were red. I think it was just a head shot, but it scared the bejesus outta me back then. Does anyone know what I'm talking about?
Click to expand...
No, that's not it. The picture looked like the Loch Ness Monster was about to eat the camera. Looking back, it may have been a drawing, but a good one at that. I'm familiar with a lot of Nessie pictures, but this one has eluded me for quite some time.
A

#13
tinfoilpants said:
... They certainly saw me coming...
Click to expand...
I would keep my "outdoor activities" strictly within the realms of forteana, if I were you...
L

There is, or at least there was last time I checked a webcam on the loch. I did have the add for it but like many things I have wanted lately, it`s disappeared! But I`ll try looking for it anyway.
lucydru
A

#15
The best episode concerning the monster,to my mind,goes back to the fifties when the Loch gamekeeper and a local PC travelled out on the loch during the night on a still Summers night in a small boat with the gamekeepers dog in an effort to catch poachers.After about an hour of complete silence they experienced an increasing rocking of the boat accompanied by a trashing about in the water and the sound of what was described as like a horse breathing after a gallop.They could not actually see anything in the blackness but were in no doubt as to the danger they were in.It subsided after about 10 minutes.The gamekeeper in question had a total of 18 sightings during his career.I have never heard corroboration from the Pc in this case but if it had been forthcoming at the time may have persuaded the doubters.
L

It actually easy to tell the photo first mentioned is a fake. If it was a real photo then there would of been ripples in the water around the montsers neck. In the photo there isn't, it is like the monster has been in that pose for ages. Actually no because the way the water looks around it's neck looks like there is actually nothing in the water. The water in the loch is continually moving so water would occisionally buffet around anything in the water.

#17
Hello to you all i was looking at the lochness underwater cam and i took a picture of something that i do not know what of.Can anyone give me a link to someone who could have a look at this and give me a clue to what i am looking at.I inhanced the picture with colar so i could get a better look at this if you want to see this

Are you sue thats the right link, it wont work for me.

#19
Yes it is right link if the don`t work click www for the site i would like you to have a look at the Picture.I think it`s a fish but when i inhanced the picture i have not got a clue to what it is.
A

#20
cant get the link to work either,John.
A

#21
If you click the www next to my e-mail ALAN you will get to the site.Would like your thought`s on what this could be.
A

There's a disease that sheep get that causes their stomachs to fill up with gas like a balloon.

Supposing the same happens to eels at the bottom of Loch Ness? They would shoot to the surface and look like a creature with a fat body and long neck and tail. Once the gas had gone they'd drop to the bottom and look just like every other eel.
A

#24
.... and the ones that relieve themselves of the gas are Unidentified F***ing Objects!
A

#26
One theory that's not to my knowledge been expressed about Nessie is this :

There's a possiblity that Nessie may be sturgeon or seals that get lost in the Loch.
Is it therefore possible that Nessie is in fact pre-historic but only occasionally is in the Loch, possibly only using it as a safe out of the way breeding lake.
Could it possibly spend the majority of its time in the deep in the open ocean?
A

#27
As the loch has been for much of its history a solid lump of ice (i.e. during the ice ages) any suggestion that it could be a dinosaur of any description is ludicrous. Let's look for rational explanations. Mind you - my 'bloated eel' idea is a bit off-the-wall. Somebody out there must have an original idea.
R

[puffs out chest]
well, im from inverness myself- born and bred. Loch Ness is connected to the sea via the caledonian canal and the river ness. So if anything wanted to get in and out it would have to navigate a couple of locks and a pretty shallow river. I have seen seals quite far up the river so maybe its possible for them to get in and just eat the native fish of the loch.
I do believe there is something there but as to what i dont know. Most people misidentify the weird wake patterns left by boats going up and down but i know too many sensible witnesses that have seen something....
A

#29
Yeah, but if a seal swims through a lock, nobody cares much. A plesiosaurus swimming through one would be something people would notice.
A

#30
if there really was a dinosaur in the loch wouldnt there be dinosaur poo every where? or even trace's of eaten fish or whatever it eats or maybe if the loch was a home to such animals then wouldnt there be some skeletons of some of the dead ones?