At a purely personal level, I just love the green cat....
D

Wow! The website reports that there is a clear link between Al Khidr and the Wandering Jew. So - the ubiquitous and mysterious Green Man is linked with the - just as mysterious - figure of Ashaverus?

Interestingly enough, there is a link here between Khidr and the classical Jewish legend of the ‘Wandering Jew’. Krappe, in his major work on folklore, says:

it is difficult to dissociate the figure [of the Wandering Jew] from that of Al-Khidr, one of the Arabic prophets. .. With the crusades Europeans became familiar with this legendary figure and out of it developed the character of Ahasuerus or Isaac Laquedem.

Haim supports and even quotes Krappe to provide the link between ‘the Wandering Jew legend’ and the story of Khidr.
Click to expand...

Thanks for the link.

Is it reasonable to assume that the sufi el Khidr and the green man are exactly the same thing?
D

H_James said:
Is it reasonable to assume that the sufi el Khidr and the green man are exactly the same thing?
Click to expand...

I enjoyed a fantasy novel series a few years back by Robert Holdstock called 'Mythago Wood' that explored these themes. I highly recommend it.
F

Another fictional Fortean Khidr link is his part in Ian Watson's 'Miracle Visitors' (Gollancz 1978, also Panther/Granada p/b 1980). IIRC, Jenny Randles rated this novel very highly, and although I found it a bit clunky, it does represent an interesting attempt to deal with 'high strangeness' and bring a post-Jungian perspective to the UFO tale.

And it starts with a CE4 in Yorkshire, which is a good start!
D

ForgetfulCat said:
Another fictional Fortean Khidr link is his part in Ian Watson's 'Miracle Visitors' (Gollancz 1978, also Panther/Granada p/b 1980). IIRC, Jenny Randles rated this novel very highly, and although I found it a bit clunky, it does represent an interesting attempt to deal with 'high strangeness' and bring a post-Jungian perspective to the UFO tale.

And it starts with a CE4 in Yorkshire, which is a good start!
Click to expand...

That's my favorite book about the ufo enigma and it's related paranormal aspects. I also recommend The Investigation by Lem. It's not about ufos exactly but it touches on the area during an investigation by Scotland Yard looking into a series of paranormal events.

I'm very much captivated by the Green Man and I try to enjoy it as much as I can So at the moment I'm mostly walking with my head turned skywards to see if I can catch yet another one. And I'm doing a bit of research. So I hope I don't bore you too much.

Last weekend I found this wooden Green Man in Utrecht. Notice the weird winged creature the leaves are connected to. I guess late 1850 or later:

And when I found a set of stone green man on a medieval looking gate next to the Utrecht cathedral I thought I had finally found the real thing. They looked so good:

But further research showed that this particular gate has been built in 1894 in the neo-gothic style by the architect Jos Cuypers.

It seems that Dutch architects tried to find an "authentic" local style, they didn't like the clacissistic foreign styles anymore - and so turned to gothic themes. There they must have stumbled on the green man motif. Interestingly - neo gothic buildings were almost exclusively built by Catholic architects. So here again is an interesting connection betweeen the Church and the Green Man theme.

Later that week I found a few small - but angry looking - Green Men in The Hague:

Now I really want to see the Medieval "real thing". But that will take a lot of research - there isn't much left from the Middle Ages around here, and I doubt if many of these pagan images have survived the Reformation.
D

uair01,
If you like pop rock then, I recommend the following songs/cd's:

In my search for the Green Man I've walked through Prague and visited the list of Green Men that Václav Cílek published in his great book "Inner and outer landscapes". I couldn't find all of them, but they're worth looking at. All are very old and authentic and probably date from around 1300.

Most of them refuse to be photographed. They are hidden in out-of-the-way places with bad lighting and pictures turn out fuzzy or low contrast. I have the strong impression that they do this on purpose. In my search I've come to see them as real personalities. The green man motif with it's mysterious roots has an interesting way of invading your "inner landscape". But since I've first discovered the motif last summer I've really been enriched by my search.

Then I also found a lot of "neo" style Green Men from the 1890's. They are nice, but much less mysterious, don't you think? It's as if the neo-architects just re-used the motif, without being aware of it's deeper layers:

This might count as a very sexy green woman:
http://i39.photobucket.com/albums/e182/uair01/greenwoman_prague.jpg

And I think that this is a green cat, I think it's moderately old, but don't know the age of the building:

Thank you; those are wonderful.
L

I'm working on a webpage about Green Men in The Netherlands.
It has tons of pictures and some hopefully meaningful comments.
I hope you like it. My avatar - see left margin - is in there too.

And if you know any more examples in THe Netherlands - especially old ones - then send me a message please!

All this cool stuff in Britian--and the Netherlands and Prague and even the Middle East--and none of it here!

All we've got is that hairy ham-footed smelly old Sasquatch, and I'm thoroughly bored with him.

Whilst we were away in York a few weeks ago we came across Rowntree's Park literally 100 yards from where we were staying. The park is quite pretty in itself but we found a few interesting things in the park - things I normally wouldn't associate with small(ish) public parks.

I don't know how to describe this other than a kind of totem pole. At the top was a foliate man of the disgorging variety and underneath some owl faces (there's a lovely carving of an owl an a bird of prey elsewhere in the park too) and at the bottom a weirdly familiar seated figure.

Obviously fairly new and hardly the medieval 'real deal' but I thought it was interesting anyway particularly as also in the park was a 10ft helmet and as well statue of Hermes with caduceus .

It's a nice little park to eat sandwiches if you ever get bored of fighting your way through Japanese tourists in the Shambles!

Nice bit of modern park sculpture for a change.

Just came across this on iPlayer: it relates to many threads here, but the Green Man is largely associated with churches:

Churches: How to Read Them - 1. Dark Beginnings

Presenter Richard Taylor explains how churches were originally simple buildings intended to protect the altar and the most important Christian rite of all, the Eucharist. He visits Britain's finest early medieval churches to untangle the mystery of why the Anglo-Saxons and Normans seem to have been unwilling to shake off their pre-Christian past and to have continued to fill their sacred buildings with mysterious pagan images. An ancient book in an Oxford library helps Richard find an answer.

It seems he's abandoned the bucolic woodland look for something more modern and aggressive...

I know you lot want proof, so here's a fotie wot I took:

Looks like he's trying to replicate the teeny-tiny toy soldiers one gets in big bags, rather than the quite marvelous Airfix 15mm sets we used to get.

I'm surprised he was allowed to stand there with a gun. I know it's green and must be a toy one, but still I though all of that sort of stuff was banned.

oldrover said:
I'm surprised he was allowed to stand there with a gun. I know it's green and must be a toy one, but still I though all of that sort of stuff was banned.
Click to expand...

It's also a WWII Nazi outfit. Clever way to sneak the wearing of Nazi memorabilia past the politically correct police...
S

oldrover said:
I'm surprised he was allowed to stand there with a gun. I know it's green and must be a toy one, but still I though all of that sort of stuff was banned.
Click to expand...

It's also a WWII Nazi outfit. Clever way to sneak the wearing of Nazi memorabilia past the politically correct police...
Click to expand...

Sorry to be a pedant but it's not WW2 German, the 'nazi' helmet was flared slightly around the back and sides, whereas the one above isn't.
Not sure if what he's wearing is a real military helmet at all, I don't recognise the style. It's a little like some current US military helms but the drop down behind the ear is too sharp an angle when it should be curved. (Sorry, military helmets are one of my quirky interests )

Sir Gawain and the Green Knight!

I recently went in on a Crowdfunder to support a community arts project celebrating the connections of the medieval poem to Leek in Staffordshire. I knew I couldn't get down for the creative workshops and so on so I went for pictures of some of the art as my tangible reward. One of the benefits of the project is that, even at a distance, I feel I am part of the project!

For those who would like to enjoy the art, here is the link to the Fulfilled funding page, and also the FB group - where completed pictures have just been unveiled!

I find it fascinating, and enjoyable, that these things are so current and that places are so keen to claim them!

As well as (factually tenuous and mythically firm) links to the green man idea, this has links to the importance of heads in folklore.... I havered about where to put it!

The surprising roots of the mysterious Green Man

In this video, Alastair Sooke meets with Common Ground, the environmental charity that is the custodian of one of the largest collections of Green Man photography, donated by the late British botanist Kathleen Basford. She was known for her research into the cultural significance of this mythical figure, arguing that it acted as a motif for the "spiritual dimension of nature".
Click to expand...

Met this fine bearded fellow in Carlisle recently. Quite a modern-looking carving, likely a reference to Carlisle Cathedral's Green Men. 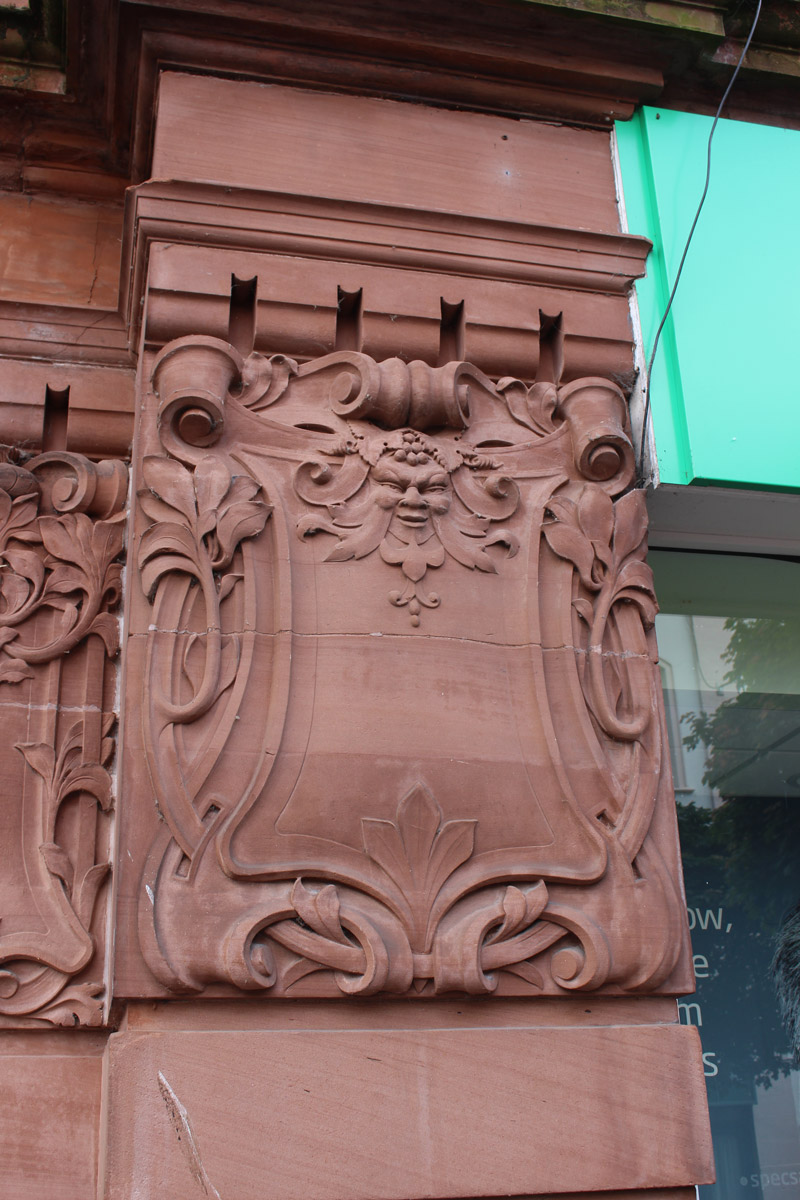 Late to the party as ever.... I went to Jordan in 2002, mainly to see Petra, but the trip took in a lot of other places, including the Roman city at Umm Qais, the Gadara of the Bible. The ruins were quite small, and there were lots of bits strewn around, including a piece that looked like it had come from a column or frieze, and it was very definitely a Green Man. Ok, a “foliate face”. I have a photo somewhere that I’ll try to dig out if anyone is interested?
You must log in or register to reply here.
Share:
Facebook Twitter Reddit Pinterest Tumblr WhatsApp Email Link
Top