American Science and Surplus has an amazing selection of goodies, including military surplus and just plain odd things. www.sciplus.com
T

Think Tank
Link is dead. The MIA webpage can be accessed via the Wayback Machine:
https://web.archive.org/web/20000324230149/http://www.wonderfullywacky.com/thinktank.htm

Ever wish you had an extra brain?

Of course you do!! But how? Oz is a hell of a hike. Wait, two brains are better than one, you could simply get Dr. Karlosis’ THINK TANK™
This glowing life-like brain in a bubbling self contained unit, is much like the ones from the 1950’s horror films.
Click to expand...

Last edited by a moderator: Thursday at 5:56 AM
R

a subtle way to tell someone they have a problem?

The insect ones are a bit gross, i wouldn't like one of them (well, i'd rather have a stuffed toy in the shape of a headlouse than the real thing, but i'd rather have something less gross, like a bunny rabbit).
Last edited by a moderator: Thursday at 5:58 AM

I thought we'd had a link to that page before.

My brother sent someone a link to the Helicobacter one, as they had just been diagnosed with it. Cheered them up no end. Which, if you know what Helicobacter can do to you, is a good thing.
O

SolidAlliance has announced the “world’s first USB memory with ghost detection.” The “GhostRadar USB Memory,” in addition to having a capacity of up to 512MB, features a magnetic field sensor, people-detecting sensors, and a biological clock. When the unit detects a ghost, a certain pattern will shine on the LED display.

Not that ghosts and USB memory have anything to do with each other.
Click to expand...

Can someone translate - i'm intrigued.

SolidAlliance Corp.'s portable GhostRadar beeps and flashes red lights in response to unusual magnetic waves. It also reacts to body heat and perspiration detected by a sensor where users place their thumbs.

The gadgets went on sale Friday in Japan and the first shipments to the United States are on their way, said SolidAlliance Vice President Yuichiro Saito.

GhostRadar is a novelty item that comes attached to USB memory storage device, which holds data such as documents, digital photos and MP3 music files and plugs into a computer's USB port. Its memory ranges from 128-512 megabytes.

The device's memory and ghost detector functions are not linked, Saito said.

GhostRadar is recommended for spooky late nights alone at your computer, and for those curious about finding out if their sudden chills represent a supernatural visitor, Saito said.

The device may beep as often as once an hour in a place that's haunted but might fall silent in other spots, Saito said. He wouldn't elaborate on how it works.

"This detects invisible phenomena and so the system is confidential," he said. "This is not a game. This is a measuring device."

The company's other USB memory offerings have been hits in Japan.

The Sushi Disk comes with replicas of various types of the Japanese delicacy, including shrimp and raw tuna. The i-Duck storage unit includes a colorful glowing duck.

In Japan, GhostRadar costs about twice as much as a regular memory storage unit at 19,800 yen (US$185) for 512 megabytes, according to Yokohama-based SolidAlliance.

U.S. prices haven't yet been decided, the company said.

Totally attention-starved, they compete with each other for human affection -- or, getting touch, as they like to say.

When you give Needies touch (by hugging and squeezing them), they will return your kindness with songs and shameless flattery.

But remember that Needies always know when other Needies are getting touch! If one Needie is getting touch while others are neglected, the unloved Needies will conspire to take its place.
Click to expand...

Basically if you get abducted and not returned safely these tags provide instructions to help someone else get you back safely into your bed - brilliant idea and a definite gap in the market (just think about all those people who go missing each year!!).

Review of "505 Weirdest Online Stores: 505 Things You Never Thought You Could Buy Online"

Found this link over on BoingBoing

----------
Anyway Fangoria have a range of T shirts out for Xmas and they have sections for zombies:
http://fangoria.com/oscommerce2/index.php?cPath=61_52

The one that really caught my eye (not literally) is the Cthulhu celtic knot:

Anyone remember the Inhumanoids, vaguely Lovecraftian monster toys from about 20 years ago?

It would have certainly brightened up The Deer Hunter.

I can't work out if this is for real or not, but it's pretty scary either way:

X-UFO
Out of this world!

The most annoying thing about UFO sightings is that they're usually reported by redneck gas pump attendants who you wouldn't trust to fill up your car, let alone tell you a story. And why are the UFOs in question always 'kinda seegar shaped' with 'itty bitty rowsa-lights'? Probably because said spotters have just made the whole thing up in a futile attempt to flog a Polaroid of a hubcap dangling from a fishing line to the local rag, to pay for a new set of dungarees and some banjo lessons.

X-UFO Call us cynical, but we were getting mighty tired of this whole UFO business. But then the jaw-dropping X-UFO floated into Hangar Firebox and we were smitten all over again. This groundbreaking flying, er, thingy, is a truly innovative triumph of technological ingenuity, and it's guaranteed to have onlookers calling the MOD hotline, as it is unlike any other R/C vehicle ever to grace the skies.

X-UFO A stabilising gyroscope and four independent rotors are suspended on an ultra-light, yet durable carbon-fibre frame, giving the X-UFO astounding manoeuvrability, both indoors and out. You control the action with a 4-channel digital proportional transmitter that can operate the rechargeable X-UFO from up to 100 metres away - perfect for causing Orson Welles-style 'the Martians are coming' pandemonium.

X-UFO Once you get to grips with the controls you'll be able to make the X-UFO go left, right, up, down, forwards, backwards - it can even hover in a stationary position. Eerily alien it may be, but there's no room for extraterrestrials onboard as the centre of the craft houses a seriously hi-tech receiver and an advanced gyroscope to ensure inflight stability. This mysterious machine also boasts powerful coloured LEDs for psychedelic night flights.

You won't start sculpting mountains out of mashed potatoes or humming 'duh, ner, ner, nuh, ner' in the shower non-stop, but the X-UFO will take over your life, as it delivers close encounters of the fun kind each and every time it takes to the skies. Cosmic!

This website may have been mentioned before, but it's worth another look:
http://stupid.com/

..or if you prefer something more religious, how about these?

The Peace Tank, not to be confused with the War Tank. 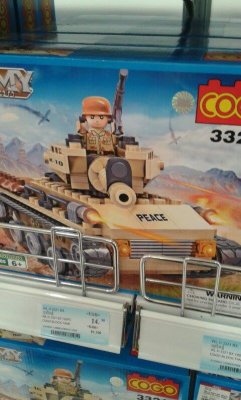 I'm not sure which aspect of this toy is the most WTF-able ...

- It's a toy figure of a singing cactus;
- It sings songs in an odd trio of languages - English, Spanish and Polish;
- The Polish version contains lyrics about depression and cocaine;
- The Chinese manufacturer stole the offensive singing from a Polish rapper;
- The Polish rapper was unaware his work had been ripped off and installed in a children's toy; or ...
- It took months of sales before anyone conversant in Polish noticed the problematic audio.

An Ontario grandmother who bought an educational toy for her 15-month-old granddaughter was shocked when the dancing cactus started swearing and singing about doing cocaine.

"This toy uses swear words and talking about cocaine use," Ania Tanner told CTV News Toronto. "This is not what I ordered for my granddaughter."

The cactus was sold on Walmart’s website as an educational toy for about $26 and sings songs in English, Spanish and Polish.

But Tanner, who is Polish, said when she listened to the Polish lyrics, the cactus was singing about doing cocaine, drug abuse, suicide, depression and used profanities.

"It just so happens that I am Polish and when I started to listen to the songs and I heard the words," she said. "I was in shock. I thought what is this some kind of joke?"

The song is by Polish Rapper Cypis, who is reportedly unaware his song was used by the Chinese manufacturer of the children's toy. ...
Click to expand...