*Allegedly. I've had gas bills that are funnier than the average clown.
Click to expand...

That's brilliant – I hate clowns but that's a brilliant use of them: sitting there making balloon animals and miming crying. Absolute genius, I'm guessing it was used to discomfit the people handing over the redundancy papers and, I'm guessing, it would have worked too!

Was remembering my childhood and realised I'd met 'Coco the Clown', who was one of the most famous clowns in the UK at the time.
https://en.wikipedia.org/wiki/Nicolai_Poliakoff
I was probably 10 years old at the time. He came to the school and walked around in his full outfit, talking to us about his clown outfit and road safety. He had an unusual accent (just found out he was Latvian). He seemed like a nice guy and wasn't 'creepy', although he was a man of few words. I remember asking about his huge boots and he told me that he'd had them made at great expense.
His son, who was also a clown, lived near my home town. I think Coco may have been visiting him at Billy Smart's Circus at the time, which had its headquarters near me.
Last edited: Dec 6, 2019

Mythopoeika said:
He came to the school and walked around in his full outfit, talking to us about his clown outfit and road safety.
Click to expand...

I think that we had a red haired clown come to talk to us about brushing our teeth well.

I wonder how many dental phobias resulted

Frideswide said:
I think that we had a red haired clown come to talk to us about brushing our teeth well.

I wonder how many dental phobias resulted
Click to expand...

He always was a sad panda.

A mysterious prankster who has been dressing up as Pennywise the evil clown from the popular “It” films and trying to scare passers-by has been getting a lot of attention in Ukraine, including from prosecutors who think the people behind the stunt deserve to be locked up.

The real-life Pennywise was first spotted on the streets of Mukachevo, in Western Ukraine, on December 9th, when local media published photos of a scary looking clown walking through the streets and hiding behind a bridge, waiting to pop in front of unsuspecting passers-by. Then, a few days later, a video shot at a gas station shows the mysterious clown pretending to pour gas over people’s cars after they go inside to pay. Some run for the hills abandoning their vehicles, while other just get behind the wheel and drive away. In another video, the clown opts for the classic popping-out-of-a-trash-can stunt, which doesn’t work quite as well as intended, but is apparently enough to get him in trouble with local authorities. ... 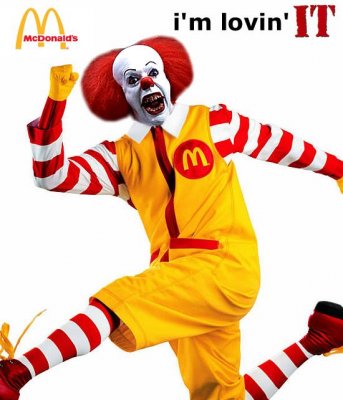 That's all I wanted to say really.

A mysterious prankster has been getting a lot of attention in Ukraine...
Click to expand...

Potential for sharp intakes of breath there, Ramon...

I obviously meant it was a Russian agent trying to cause panic!

Here's a GOOD clown. Sadly he is no longer here to receive our admiration.


A CLOWN who cheered up sick children by giving them laughter therapy was shot dead by a robber as he tried to defend a mother and her baby.

Humberto Rojas Landa — known as Doctor Cosquillas (Doctor Tickling) or Payaso Solecito (Little Sun Clown) — was blasted in the head at a restaurant in the central Mexican city of Puebla.

According to witnesses, an armed man burst into the building planning to rob customers.

Local media said Landa, 51, tried to defend the woman and her son and hit the robber with a water jug.

The gunman then shot him in the head before fleeing the scene with a single mobile phone.
Click to expand...

escargot said:
Here's a GOOD clown. Sadly he is no longer here to receive our admiration.

The evolution of the mystery scary clown in these strange times :

Police have said they are keen to trace a person who has been walking around a village dressed as a 17th Century plague doctor.
Residents of Hellesdon, near Norwich, have been both "terrified" and amused by the individual dressed in a black cloak, hat, and pointed beak-like mask.
Doctors treating those with the Black Death believed the mask acted as a filter against the disease.
Police said they would like to give the individual some "words of advice".
It is thought the person has been dressing this way for about two weeks for their daily walk, with a photograph posted on a village social media page attracting many different points of view.

Police have identified the Hellesdon "doctor". Teenage lad. He's been given "words of advice".

Another plague doctor is doing the rounds, this time in Crouch End, London.

I'm late to this thread. As a Fool (with a Morris dance team) I have an interest in Fools, jesters, clowns and the like.

As a 57 year old Englishman, I feel that the whole "scary clown" thing is a fairly recent development. As a kid, I associated clowns only with the circus, and circus clowns were regularly shown in comic books and stories as benign characters. If a clown turned out to be a Bad Guy, we were meant to be shocked: "How could that jolly clown turn out to be a bank robber?"

Clowning then moved out of the circus. We now have "party clowns" (perhaps they had them in the USA earlier than we did) and you also get the obligatory "balloon animal clown" at village fetes and shows, and people in clown suits collecting for charity, and so on.

These new clowns usually have no background in clowning. Many seem to feel that wearing the costume and make up is 9/10 of the battle.

Then, having vaguely read something once about the clown "subverting social conventions" a few of them take the costume, wig and face paint as a licence to behave in a manner that would not normally be socially acceptable. In the guise of the clown, they can approach strangers, and force their often poorly thought out attempts at humour onto them. It bugs people and can genuinely be creepy.

Meanwhile, there is a real thing that the smile of the clown is painted over the ordinary expression of the person. There is a horrible disjunct between the big colourful smile and what may be a sad or grumpy expression behind it. We are allowed (forced?) to get closer to clowns now than we did when they were confined to the circus ring, and the man beneath the makeup is more clearly visible.

Add to that the fact that in modern society we perhaps have less patience than people use to have with deliberately stylised performance: the set gestures for happy, surprised, angry, afraid, wistful, pensive, etc.

Of course modern entertainment has its own conventions: examples include the white hat/black hat thing in westerns; the Bad Guy in films having dark stubble; the master villain having a shaven head; the girl folding one leg behind her when she kisses the man at the end of the film. We sort of recognise these conventions and may ignore them or affectionately laugh at them, but we draw a distinction between that and the intrusive artificiality of the "this gesture means that emotion" approach of traditional clowning.

We thus end up with a situation in which many of the clowns we encounter are poorly rehearsed and possibly socially inadequate individuals, wearing fancy dress shop costumes, doing boring stuff with balloons, getting a little too close for social comfort, and having a normal face and expression beneath an expression drawn on in badly-applied face paint. This is not a fair description of all clowns, but it is a fair description of many that I meet either as a member of the public or when I'm performing at events with the Morris dancers.

This creates a feeling in many adults and some children that clowns are "odd" rather than "funny" and that clowns are irritating and therefore to be avoided. We have far more taboos about invasion of personal space (Covid 19 aside) these days, and we are more nervous of being picked out from the crowd. Certainly the English have become a race of cautious observers rather than participants.

So, if we have reached this point where the clown is generally seen as a Bad Thing, it is a small step to seeing him as a Bad Man.

Feed into that the trope of the evil clown from American horror films, and you get two effects: inadequate clowns trying to incorporate some aspect of "evil clown" into their personas; and audiences associating clowns with "evil".

Personally, and I've met a few, and watched many on YouTube, I think most clowns aren't evil, they're just boring.

However, watch someone like Abner the Eccentric on Youtube and you will see someone with genuine skills and charisma, who uses some subtle gestures, little or no make up, an understated costume, and can be extremely entertaining.

Covid-19 plunges Latin America back into poverty and violence

Latin America – home to 8% of the global population but nearly half of recent Covid-19 deaths – is in the eye of the storm, with more than 120,000 of the world’s 524,000 coronavirus fatalities, and counting.
Click to expand...

It is topped by an eye-catching photo of a white coffin decorated with polka dots and carried by sad-looking clowns in masks; 'The funeral in Huancayo, Peru, of William Rojas, a clown known as Chupetin, who died of the virus.'
Most incongruous.

Creepy thug dressed as clown chased girls, 12, through park while 'laughing hysterically'
The 'killer clown' yob jumped out from behind a bush in the frightening outfit before he started manically laughing like 'something out of the movies'.


A creepy thug dressed in a clown suit chased two young girls through a park while manically laughing in a terrifying incident.
The yob jumped out from behind a bush in the frightening outfit before he started hysterically laughing like 'something out of the movies', according to one of the girl's mothers.
The friends, aged 12, were walking in Walton Hall Park, Liverpool, around 9pm on Saturday when the horrifying incident took place, as reported by The Echo.
Mum Marissa Roberts says the youngsters were filming videos together when they came across the creepy figure.
Click to expand...

On Sunday in Fargo, North Dakota, Roxane Salonen was playing tennis at a public park with her teenage son when she noticed a group of four figures approaching the court. As they came closer, Salonen realized they were all wearing clown masks. From the West Central Tribune:

She said they were chanting something as they closed in on her and her son, but they quickly ran as she called the police who told her it was the second report of masked clowns in the city that night.
Click to expand...

"Even if it was a practical joke, right now it probably isn't a good time to be doing that, because there's so much worry right now in the world," Salonen said. ...
Click to expand...